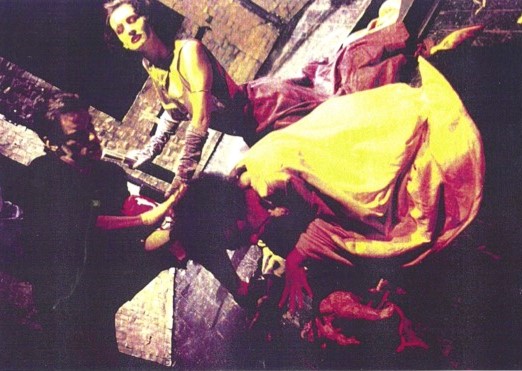 Summarizing the plot of an Expressionist play is futile, but here goes: In “Humanity” (“Die Menschen”), a 1918 German work by Walter Hasenclever, a murdered man, roused from his grave, spends a spectral day trying to bring compassion into a world ruled by money lust and indifferent to injustice, before he finds peace in his grave again when his murderer discovers his own humanity.

Other viewers of the production at the Living Theater will give other accounts, no doubt. Most will find it weirdly exciting. And it is quick; the directors, Elena Jandova and Martin Reckhaus, whip 19 actors in 31 roles through 24 scenes in just over an hour. But Hasenclever wrote the play as a string of almost speechless blackouts, and here it is given spectacular staging. Some scenes — such as the murdered man’s discovery that a head he carries around in a sack is his own — fade in bright light.

The program says the set designer, Tom Bynum, is a yacht designer. I believe it. Only a man required to contemplate shipwreck could dream up the metallic, jagged and broken city in 20 pieces, which the characters constantly dismantle and reconstruct. Admittedly, haunting music by Patrick Grant and Philip Brehse makes it all seem a ballet, but one fears limbs may be lost.

This is the kind of play the members of this company are good at — very good. It would be hard to forget the scenes of tycoons gambling billions and pyramiding paper empires while around them people assault one another for pennies and see their babies starve, or a dynamite dialogue of only 14 words revealing that Hasenclever’s view of socialist solutions was also bitterly realistic.

To convey so many subtle ideas so dramatically and economically is a considerable achievement. This performance is a gift that makes one want to see the scores of other plays Hasenclever wrote.

Page load link
We use cookies on our website to give you the most relevant experience by remembering your preferences and repeat visits. By clicking “Accept All”, you consent to the use of ALL the cookies. However, you may visit "Cookie Settings" to provide a controlled consent.
Cookie SettingsAccept All
Manage consent

This website uses cookies to improve your experience while you navigate through the website. Out of these, the cookies that are categorized as necessary are stored on your browser as they are essential for the working of basic functionalities of the website. We also use third-party cookies that help us analyze and understand how you use this website. These cookies will be stored in your browser only with your consent. You also have the option to opt-out of these cookies. But opting out of some of these cookies may affect your browsing experience.
Necessary Always Enabled
Necessary cookies are absolutely essential for the website to function properly. These cookies ensure basic functionalities and security features of the website, anonymously.
Functional
Functional cookies help to perform certain functionalities like sharing the content of the website on social media platforms, collect feedbacks, and other third-party features.
Performance
Performance cookies are used to understand and analyze the key performance indexes of the website which helps in delivering a better user experience for the visitors.
Analytics
Analytical cookies are used to understand how visitors interact with the website. These cookies help provide information on metrics the number of visitors, bounce rate, traffic source, etc.
Advertisement
Advertisement cookies are used to provide visitors with relevant ads and marketing campaigns. These cookies track visitors across websites and collect information to provide customized ads.
Others
Other uncategorized cookies are those that are being analyzed and have not been classified into a category as yet.
SAVE & ACCEPT
Go to Top